Silk is an animal protein fibre produced by certain insects to build their cocoons and webs. Silk is produced by a huge variety of different types of insects, though these types of silk are not exploited for commercial purposes. However, the silk produced by spiders is used in a small number of other commercial applications, for example weapons, telescopes, and other optical instruments.

People have exploited the ability of silkworms to produce silk threads since very early times. Cultivation of the silkworm is known as sericulture (from Lat. sericum ‘silk’). Silk produced by Bombyx mori, and a few others of the same genus, is used by the commercial silk industry. Bombyx mori are moths mostly found in China, and the worms of these moths feed on mulberry leaves. The “silkworm” is a moth pupa, though colloquially this term is used for caterpillars producing silk fibres.

Hatching the eggs. The mating of silkworms lasts for about 6-8 hours. After a few days, the female deposits 300-400 eggs and dies almost immediately. Each egg is oval-shaped, flattened, about 1-1.5 mm long. The eggs are carefully selected. After 10 days of accelerated incubation, 0.6 cm long caterpillars hatch out of the eggs.

Spinning the cocoon. At this point caterpillars are separated and placed into separate wooden enclosures. Each caterpillar possesses a pair of glands which secrete protein filaments that are quick to harden on exposure to the air, and which are bound by the protein (sericin) secreted by the second pair of glands. Over the next four days, the silkworm spins filaments into a cocoon by rotating its head. The finished cocoon is made out of a continuous 3000 m long silk filament, forming an elongated oval shape. The Chinese species produce a yellowish colour, the Japanese – greenish, others – white. Left alone, after 12-16 days a moth would hatch out of the cocoon, but this would break the silk filament. Therefore, most silkworms (some are reserved for mating) are destroyed with hot water or hot air at this point. 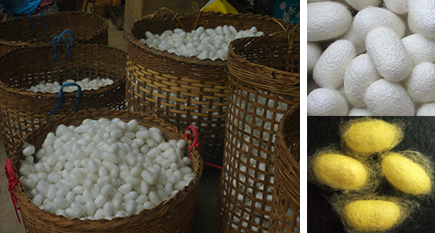 Unreeling the filament. At this stage, the cocoon is treated with hot air, steam, or boiling water. The binding effect of sericin weakens in the heat. Then, the silk filament is teased delicately from 4-8 cocoons. Raw silk still contains quite a lot of sericin, which also remains in silk fabric. Once the fabric is washed with soap in boiling water, the sericin disintegrates, and the fabric is left soft, lustrous, and up to 30% lighter. About 2500 cocoons are required to produce a half of kilogram of raw silk.

Types of silk. Silkworms are bred for silkmaking in China, Japan, India and Southern Europe. By cross-breeding, different colours of thread are produced (golden, or other colours). Raw silk is spun into thread used for weaving or knitting. Depending on the spinning, four different types of silk thread may be produced (crepe, tram, thrown singles, and organzine), which later on are used for weaving or knitting various types of silks.

Production of duvets. Traditionally, 2 types of silk fibre are used in duvet and pillow production: silk tree silk (Mulberry silk) and wild silk (Tussah). The larvae of wild silkworms feed on various leaves, therefore the filaments of their cocoons are not consistent, they are shorter and thicker, and they have more impurities than silk produced by larvae that are fed only on mulberry leaves.
Usually, cocoons made by 2 larvae are used for duvets and pillows fillings. Both larvae start spinning the cocoon at the same time, which results in a larger-than-usual cocoon and intertwined filaments. These cocoons are not suitable for unwinding the filaments, however they are perfectly suitable for production of stuffing for duvets and pillows.
Cocoons, selected by hand, are soaked in hot water. Larvae are removed from these softened cocoons. The raw silk is then properly rinsed and stretched on a special frame. In this way 7-10 cocoons are stretched on the same frame. The silk floss is then dried and prepared for the second stage of production – stretching and layering. 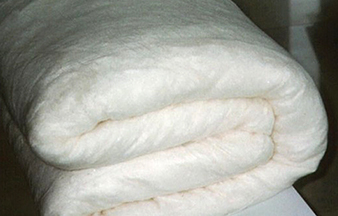 The fillings of quality duvets and pillows are handmade. Normally, four workers secure raw dried silk on four sides, and stretch it up to the desired size of the duvet. In this way the silk is layered until the desired thickness is reached.

For example, for a summer duvet that weights about 1 kg, 200 thin layers are needed. This kind of filling sags into lumps, therefore the tick of the duvet is attached to the silk stuffing in a few places. This method has other advantages: so called “warmth holes” will not form in the stitched places. 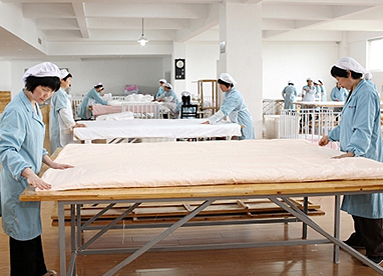 Usually, duvets are quilted when the filling is stretched by a special machine. This machine tears the silk and stretches it unevenly, therefore the price of these duvets is much lower.
The thread of Mulberry silk filling is more solid and thinner than that of Tussah silk. Mulberry silk fillings are fluffier, lighter and preserve heat better than the fillings of the same thickness made out of Tussah silk. Therefore, the duvets and pillows filled with hand-stretched Mulberry silk stuffing are valued most highly.